For 35 years, Liz Takano and her family called Coffey Park home. The Tubbs Fire ripped through the neighborhood in the early hours of October 9.

“I woke up to the sound of pounding on our house,” Liz recalled. “My first thought was something happened to my kids, or someone was trying to break into our house. It was our neighbor from two doors down, who told us our entire neighborhood was evacuating.” Liz woke to her dark house, without electricity, and the lingering smell of smoke. Rummaging through the dark was not an option. She immediately gathered her elderly mother and her walker, her son, daughter, husband and their dogs. “We didn’t know if we had five minutes or 10 minutes. We got out very quickly with nothing, just ourselves,” she said. “Then we opened our garage door and saw pure smoke.”

The family squeezed into her husband’s Volvo, and they took off for an evacuation site. They took refuge at Finley Community Center, which was transformed into an emergency assistance center. The American Red Cross, local police department and other emergency responders led the charge. Once inside, Liz’s family bunkered down in a corner, where they stayed huddled for several hours. People were strayed everywhere, just with the clothes on their backs and their pets. The center provided blankets, meals, medical care and fire updates throughout the night.

At some point in the night, Liz took her dog outside and overheard a radio dispatch. The reporter from the Press Democrat was on the scene in Coffey Park, naming off all of the streets that were destroyed. It wasn’t until the reporter named the Orchard West Senior Living Community – which was right behind her home – then she knew. “I just had that gut wrenching feeling, it was real,” she said. “Our home was gone. It had only been a couple of hours, but thousands of homes were gone.”

Liz was not alone. The Coffey Park neighborhood was leveled almost entirely – an estimated 1,300 structures. With so many fires coming in every direction, the situation was unpredictable and changing by the minute. Roads and highways were closed, and high winds were pushing the fires in multiple directions. Finally, they received confirmation that some roads were clear. They retreated to their son-in-law’s home in Sebastopol, a town about 17 miles away. They would stay there for nearly three weeks. Two weeks after the fire, Liz and her family could finally return to their home. Her children from out-of-state flew in for the occasion. The National Guard was handing out permits for residents to gain access in and out of the neighborhood.  They had already seen photos on the news, but it would be the first time they could witness it themselves.

“It was a very eerie experience, driving down the same road we always did for 35 years,” Liz recalled. “It didn’t hit me until I looked at the enormity of the whole neighborhood. It wasn’t just about us, it was about the community. I felt everyone’s pain, not just my own.” There wasn’t much of anything left on their 10,000 square foot lot. Liz and her children rummaged through the property, to try to find something that survived. The fire was so hot it burned literally everything they had.

For 35 years, that house was a home. Liz and her husband raised all six of their children there. They lost countless, priceless items that insurance couldn’t replace – her daughter’s time capsule for her 30th birthday, boxes full of journals. They lost all of their precious records, their family keepsakes like home videos, photo albums. 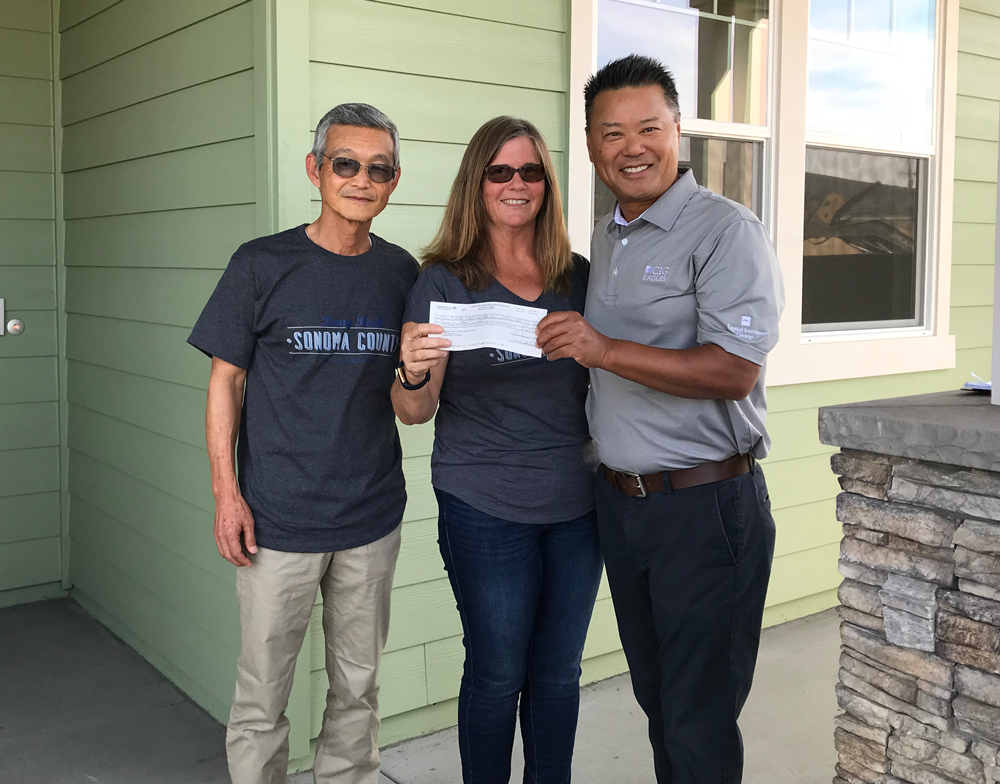 The fire happened on Monday night, and by Tuesday afternoon she was in touch with her insurance agent. Liz had been an Auto and Home policyholder with Capital Insurance Group (CIG) for many years. In the days following, her family visited CIG’s emergency catastrophe team at George Petersen Agency in Santa Rosa. It had been years since Liz reviewed her insurance policy, and had no idea what kind of coverage she had. While she was afraid she was under-insured, she was pleasantly surprised that wasn’t the case. Her adjuster was able to cut her a check in-person, right then and there.

“I’ll never forget what our adjuster told me. ‘Insurance isn’t to make you rich or make you poor, it’s to make you whole,’” she said. “He told me, ‘You’ve been paying your premium all these years, this is your money.’ The whole process was so reassuring.” Today, Liz and her husband live with their son in Santa Rosa, only about a mile away from their old neighborhood. They plan to rebuild their home with a local developer. In the weeks and months following the fire, the holidays were a particularly tough time.

“It’s difficult walking around and seeing Christmas decorations. It’s never about the things, but it is symbolic. Holiday decorations are that unifying force of having a place to go to – a home,” Liz said. “Even rebuilding a house, it’s not the same house. Our family will never be the same again. But I want to believe that we’ll be better people, stronger people, for going through something like this.”

UPDATE: On Monday, October 9, 2018, Liz Takano and her husband were able to move back into their new home, on the very same lot.

“It’s been one year, I cannot believe we’re finally here,” Liz said. “We’ve been watching the progress from day one, so it feels familiar. But this entire process has been so emotional. We are so grateful for our team at CIG for making this possible. We’re finally  home.”